After his awakening and decision to take his insights as teachings  into the world, the Buddha held his first sermon, which is also referred to as “Turning of the Wheel of Truth”, at Deer Park in Isipatana.

The core of the Teachings of the Buddha, upon which all Buddhist traditions are based, is “The Four Noble Truths” (ariya-sacca).

that all existence is imperfect, unsatisfactory and subject to suffering. This is to be realised.

that the cause for all ignorance, craving, and aversion exists in one’s own mind. These are to be overcome.

that through the cessation of the causes, suffering also ceases. This is to be achieved.

the Noble Eightfold Path as shown by the Buddha leads to the cessation of the cause of suffering . This is to be practiced.

The First Noble Truth says that all worldly forms of existence are unsatisfactory and can never make one completely happy. This first truth is also known as the “Buddha’s Diagnosis”.

The second truth contains the deeper diagnosis and comes to the conclusion that the roots of suffering are ultimately found in one’s own mind. This concludes the Buddha’s diagnosis.

The third truth expresses the realisation that the roots of our suffering can be destroyed. Through the elimination of these roots we can bring our suffering to an end.

And in the fourth truth, the Buddha gives us in his Noble Eightfold Path the therapy for our healing.

The Buddha shows us the way out of a cycle, a way we must travel ourselves.

This way is the “Noble Eightfold Path”, which can be divided into three main groups:

The many teachings of the Buddha are to be understood in the broadest sense as explanations of the Four Noble Truths. The practice and implementation of the Noble Eightfold Path is not to be understood as a hierarchical form, rather as a concurrent practice of all its elements. 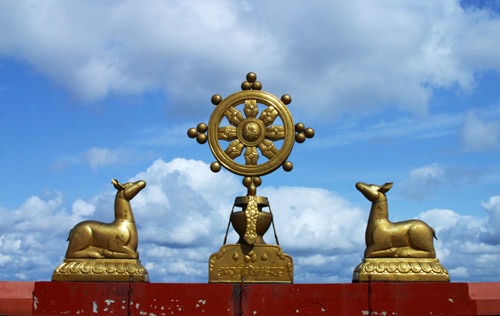